Version 11.13d: finally graphics created directly on the board

November 08, 2018
Graphics created directly on the board

This is a long-demanded option, the list of people who have requested it from me is too large to include here.
The working mode is similar to that of Lichess, if it is a square selected a circle is shown, if they are several squares an arrow is shown, by default.
It can be customized from the Director option, each element of the band is associated to a key (None, Alt, Shift, Ctrl) pressed at same time right mouse.


The deletion of elements is done by creating an equal element. The keys Ctrl-F1 to delete the last created element and Ctrl-F2 to delete all of them also work.

As a facility, when working in Opening Lines, with the right button you can create graphic elements that are associated with the position directly.

This behaviour can be disabled from Options-Configuration-Boards: 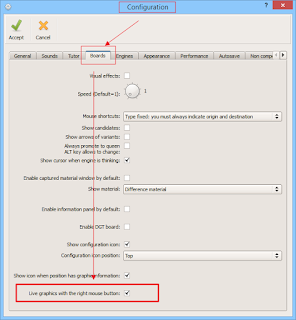 Also when playing, from Utilities menu can be disabled/enabled. 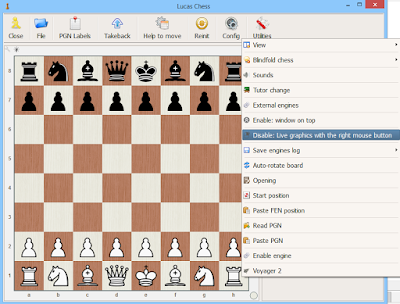 May 30, 2021
The first official binary version of Lucas Chess on Linux has just been released. It has only been made possible by the great work done by Laudecir Daniel , choosing and compiling the 67 engines, as well as laying the groundwork so that the binaries can be more widely used and others such as shortcut creation, installation scripts, ...... In addition,  Graham O'Neill  has provided Linux-specific drivers for several digital boards. This version has two limitations : 64-bit Linux OS only. Minimum GNU libc version: 2.26 (ldd --version shows it) Installation has been made as simple as possible: The installer is a .sh file, generated with the  makeself  tool, and can be downloaded from: SourceForge , GitHub The file must be run from a terminal with user permissions only: sh ./LucasChessR123_LINUX.sh Launches a GUI with very basic options: Install: Installs in LucasChessR folder inside the home user folder. Generates a shortcut in Applications > Games Launch the application at the end
68 comments
Read more